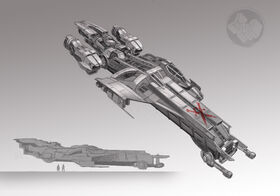 Drake maintains that the Caterpillar, a sprawling, modular spacecraft which appears at least somewhat like its namesake, is for legitimate commerce and extended search and rescue missions... but at the end of the day, the Caterpillar is truly the evil twin of the Freelancer.

The Caterpillar is a mercantile ship with a large cargo capacity manufactured by Drake Interplanetary. Drake advertises the ship as a mercantile and Search and Rescue vehicle, but its primary untold use is for piracy.

In the original development document, the Caterpillar had the following specs: