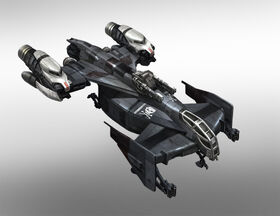 Drake Interplanetary claims that the Cutlass is a low-cost, easy-to-maintain solution for local in-system militia units. The larger-than-average cargo hold, RIO seat and dedicated tractor mount are, the company literature insists, for facilitating search and rescue operations.
While it’s true that Cutlasses are used throughout known space for such missions, their prime task and immediate association is with high space piracy. Cutlasses, often operating in groups, menace distant transit lanes to prey on hapless merchants. A single Cutlass can ravage a mid-sized transport and a pack operating as a clan can easily take down larger prey. STOL adaptations allow these interceptors to operate off of modified transports or pocket destroyers; the most common warships that make up pirate caravans.

In the original development document, the Cutlass had the following specs:

The Cutlass Blue is a variant of the standard Cutlass Black. The primary advantages of the Blue model are the addition of missiles, an engine described as 'more aggressive' by its manufacturer and Durasteel holding cells in the cargo bay. These additions have made it a popular vehicle for outworld militia to utilize on patrols.