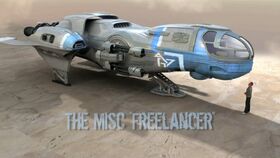 Freelancers are used as long haul merchant ships by major corporations, but they are just as frequently repurposed as dedicated exploration vessels by independent captains who want to operate on the fringes of the galaxy.

The Freelancer is a modular mercantile/exploration ship manufactured by MISC. Since its original concept, it has gone through several redesigns, especially around the cockpit.

In the original development document, the Freelancer had the following specs:

On November 16, 2012, a poll was opened on the official site presenting the two concepts for this ship's appearance.