Star Citizen is a space simulation game in development by Cloud Imperium Games Corporation, headed by Chris Roberts of Wing Commander fame. The developers sought funding through two crowdfunding campaigns, both of which have reached their minimum goals resulting in a record-breaking total of over $6.2 million. These campaigns are continued through November 18, 2012.

The game will be available only on PCs. A Windows version is definite. Macintosh and Linux versions are being considered, but no decision has yet been made.

There will be no monthly fee for online play, but the game will have to be purchased. Pricing details are not yet available.

The game will include the Squadron 42 campaign, a Wing-Commander-like story where a player character signs on as a fighter pilot for the United Empire of Earth and will protect settlements from attacks by the Vanduul and eventually earn a place in the legendary Squadron 42. This campaign will have a minimum of 30 missions. This campaign will be available offline as well as online.

Additional campaigns are planned for release after the game launch.

There will also be larger-scale multiplayer through a public persistent universe hosted on central servers. It will also be possible to set up private servers that host alternative versions of the Star Citizen universe, and allowing user-generated content is a key design goal. The gameplay will initially focus on Humans, but the universe includes alien races such as the Xi'An and Vanduul.

It is known that player characters will not automatically be citizens in the game; this is earned either through military service or civic duty. Attaining citizenship is not a necessary part of the game, but will affect a player character's standing in the game universe. The Squadron 42 campaign is linked to the persistent universe through this mechanism, as characters who complete the campaign will become citizens and earn additional credits.

The universe will be continually expanding through micro-updates occurring on a weekly or bi-weekly basis. Player actions are intended to drive change in the universe, so these updates will be heavily based on player activity. For example, it is known that players will be able to discover new star systems. These systems can then be named after the character that discovers them.

The game's economy will be dynamic and influenced by player actions, including supply and demand. The better-defended inner systems also include landing and trade tariffs, while the more dangerous outer systems are free of tariffs but not pirates.

Players can pilot a variety of spacecraft from the small one-person Aurora to the larger four-person Constellation. Spacecraft will be heavily customizable through changing components like engines, upgrades, and hardpoint systems like weapons. Spacecraft in the game fly by dynamically modeled Newtonian physics calculated in real time, allowing a ship's thruster configuration and damage to accurately affect the maneuverability of the ship.

Graphics and level of detail 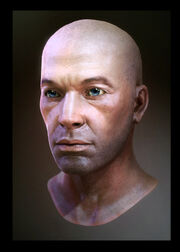 The first released render of the human male character

Star Citizen is intending to render characters with around 100,000 polygons, which is roughly 10 times that of the best games available today. Additionally, large objects, even a kilometer-long carrier, will have a level of detail equal to that of the characters at the characters' scale. The game will be using CryEngine3 as its rendering engine.

Initial Mission - "Swing on by"

To do- Go talk to Ruto at Grim Hex