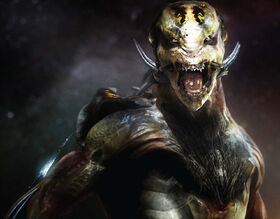 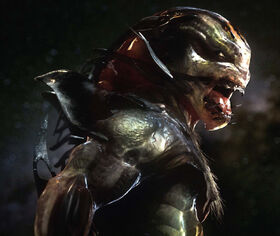 The Vanduul are an alien faction, in conflict with the United Empire of Earth.

As shown by the discovery of a derelict Vanduul carrier off Garron, the Vanduul operate in hordes of genetically diversified members. How these hordes are formed is not known. This particular ship belonged to the Goran horde.

Warfare between these hordes is as common and likely as the Vanduul waging war with other species. Speculation points to a great gathering of hordes where the Vanduul vie for the best and strongest members to join them.

Of note, all the members of the carrier were male, suggesting a central gathering for procreation as well.

Vanduul rely mostly on visual records to convey history. Writing does not appear to be their forte, only being used in quasi-pictographs that have seemingly no relationship to spoken Vanduul language. Rather, Vanduul use simple video recording devices, generally a screen with a camera to record themselves. These are oddly fairly rudimentary compared to the rest of Vanduul technology. Some have speculated the cause to be the Vanduuls' uniquely structured eyes.

The Vanduul seem to greatly relish the accumulation of trophies. They tend to have them in collections, such a Banu, Xi'an, and Human. The trophies can range anywhere from simple trinkets to the bleached arm-bones of their fallen enemies.

Knives have been found to be of great import. It seems each Vanduul makes their own knife, which can reflect the ability and personality of the constructor. Even their spacecraft, such as the Scythe, reflect this important cultural attachment.

As seen from the analysis of the X12, the carrier class ships are as large as the UEE's Indefatigable class vessels. They are armored beasts, and internally the armor is exposed except in certain cases. The Vanduul crew, numbering 1400 in this case, mostly congregated in barracks situated around the engine. Only the captain, first officer, and top pilots had decorated quarters. It should be noted there is also a recreational facility with gym equipment and even a swimming area.

The carrier in question was carrying a formidable force at least 300 Scythe combat craft, more than even the UEE's Bengal-class cruiser can handle. Only 100 were serviceable at any time, with the rest being used as spares.

Attack on the Vega System

In 2945, the Vanduul launched a large-scale assault on the Vega system. Reporter Sean Nazawa of the Aremis Post wrote a memorable account of the attack taking place, describing the emergency warnings and immediate onslaught of Vanduul artillery that followed. Bombing runs and ground forces laid waste to metropolitan areas, leading to masses of civilian and military casualties and plenty more injured men and women filling medical facilities.

Vanduul forces met UEE Navy ships in orbit around Aremis, but soon broke through their defences and were able to land on the planet. Previously, weapons manufacturer Kastak Arms had set up their presence on the neighbouring planet of Selene to safeguard against any such threat, but the focus of the company had shifted considerably since it was established.